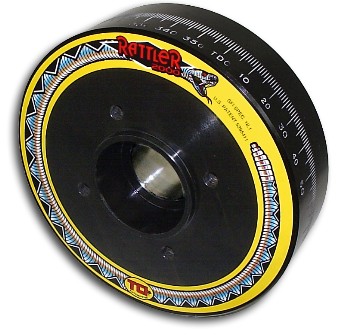 Now there is an alternative to running your crankshaft without a harmonic damper because;

The harmonic damper on the front of your crankshaft is/was there for a reason. Like the shock absorbers on your cars suspension, it reduces the vibration after you hit a bump in the road. Only, in the crankshaft the bump in the road is replaced by the power strokes of your engine.

If you took your shock absorbers (dampers) off the car, then every time you hit a bump the wheel would bounce up and down for a long time afterwards. Similarly, in the engine, the crankshaft flexing between big-end journal and the adjacent main bearing journal is damped after a power stroke with a damper. Without a damper the flexing is exaggerated and fatigue cracking ensues !!!

The trouble is that the harmonic damper is inherently heavy, it is also specifically “tuned” to the rotating masses of the particular engine and it’s drivetrain.

Any deviation from that, eg; lightening flywheels, clutches, engine swops etc, etc. will require a change to the inertia mass on the damper. This is hard maths and gets expensive. Alternatively, the “Rattler” works on a totally different principle. It is generic by design to specific engine types eg; V6, V8, 4cyl- inline, 6cyl- inline etc.

The “Rattler” works by opposing the tortional forces created in the crankshaft by the power strokes. It has a number of rollers allowed to oscillate or shuttle within pockets, causing a counteractive force to those damaging the crank.

There is a different model of “Rattler” for each engine type, but it is not ‘specific’ to a particular make of engine. ie; a 90 degree V8 engine has the same model of “Rattler”, regardless of whether it is a Ford, GM or Aston !

The technology is not new, it’s heritage lies within aerospace, where it was widely used on piston engined aircraft.

Light weight alloy versions are available to the racing engine users as no inertia rings are required.

They are not expensive, broken cranks are!!!!!!!

For more information on the Rattler® please contact us